Netflix speaks Albanian with “Arbëria” movie, the exclusive story of director Francesca Olivieri: My Calabrian origin inspired me to make the movie

PLEASE CLICK HERE, IF YOU WANT TO READ THIS INTERVIEW IN ALBANIAN EDITION.

Since December 23, 2021, on the largest movie platform in the world, Netflix, has started the streaming of the first movie in Albanian, “Arbëria”.

“Arberia” is a movie, which tells the story of a girl named Aida, who after the death of her father, returns to her country of origin in Calabria, where she discovers the culture and traditions of Arberia.

The director of this movie, Francesca Olivieri, which is with Calabrian origin, has told in an exclusive interview for Telegrafi the story behind the movie “Arbëria”, the successes marked at film festivals and her connection with Albanians. 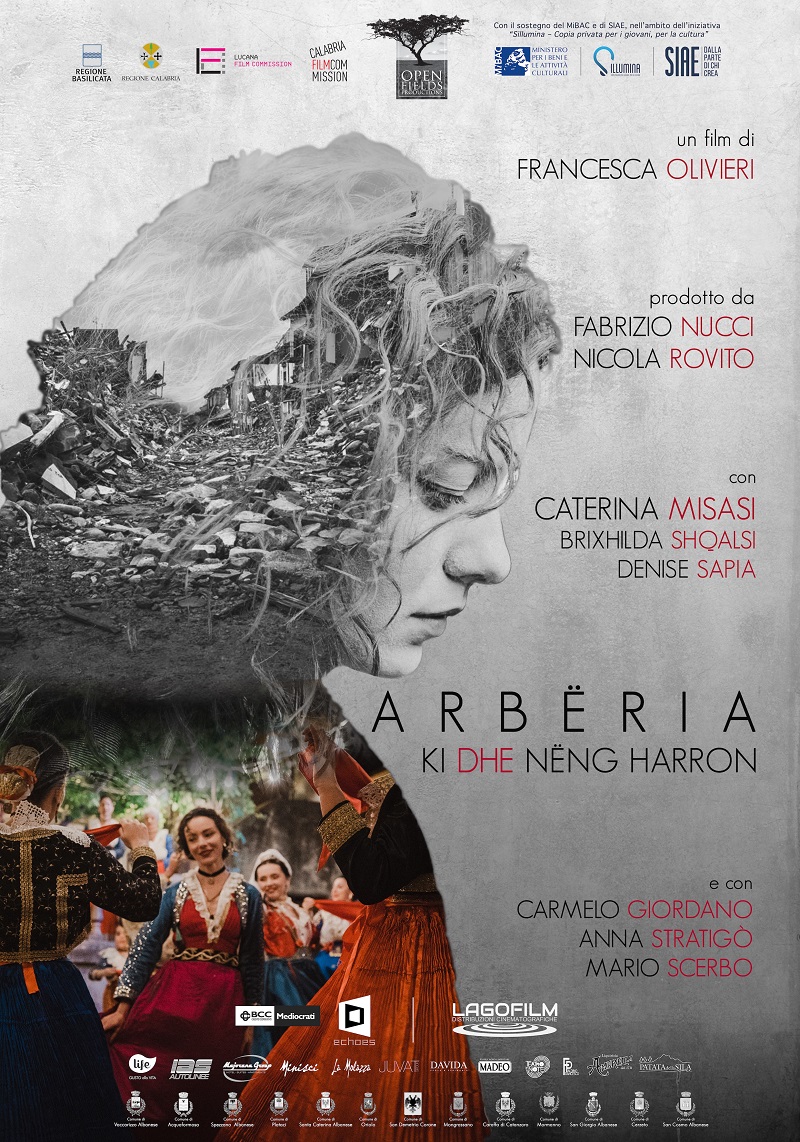 The poster of the movie “Arbëria”

The fact that this movie is currently the first in Albanian language on Netflix, has given even more echo to this movie, through which the world is already knowing the culture and history of the Arbëresh of Italy.

Telegrafi: You are the director of the new movie “Arberia” dedicated to the Albanians of Italy (arbëreshët). Tell us a little more about the whole movie?

Francesca Olivieri: “Arbëria” is a story of nostalgia, but also a story of a conflict between past and present, origins and aspirations. Aida is a courageous and modern woman, but also melancholic and with a warring personality that lives between the need to belong and search for one’s identity. She is a fashion designer, after moving many times she has settled in a city where she has opened an elegant tailor’s shop. But at the death of her father, Aida is forced to return to her native village, located in the mountains, in the south of Italy. During this journey, Aida will rediscover her mother tongue: the Arbëresh, an ancient Albanian language spoken in the minority community: the descendants of mostly Tosk Albanian refugees, who fled from Albania between the fourteenth and eighteenth centuries in consequence of the Ottoman invasion of the Balkans. This “land of Soul” – called Arbëria – gives Aida a new energy, through which she will regain control of her life and she will reconcile with her past. 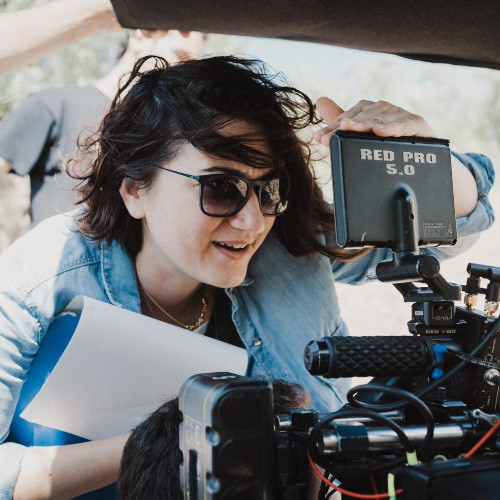 Telegrafi: How did the idea come to make a film about Albanians of Italy? Where did the inspiration came from?

Francesca Olivieri: Aida’s story is partially inspired by the personal experiences of my aunt and my grandmother, born in Santa Caterina Albanese, in Calabria, in the South of Italy. I wanted to dip into these biographical elements and orient my self towards the power and grace of the invention of the real. The subject is obviously personal, I am myself a young woman who has emigrated and I hope that this story of human generosity can be of interest to a public that is culturally scattered. I remember the first time I’ve seen a Vallja, the traditional dance of the Arberesh people, I was shocked because I felt how this moment was magic and has a cinematographical potential in itself. Then the fact of hearing my grand mother speaking this language many times was obviously my main source of inspiration. She has been my special muse all along the movie, and she taught me the traditions and what is worth in the Arbëresh culture. 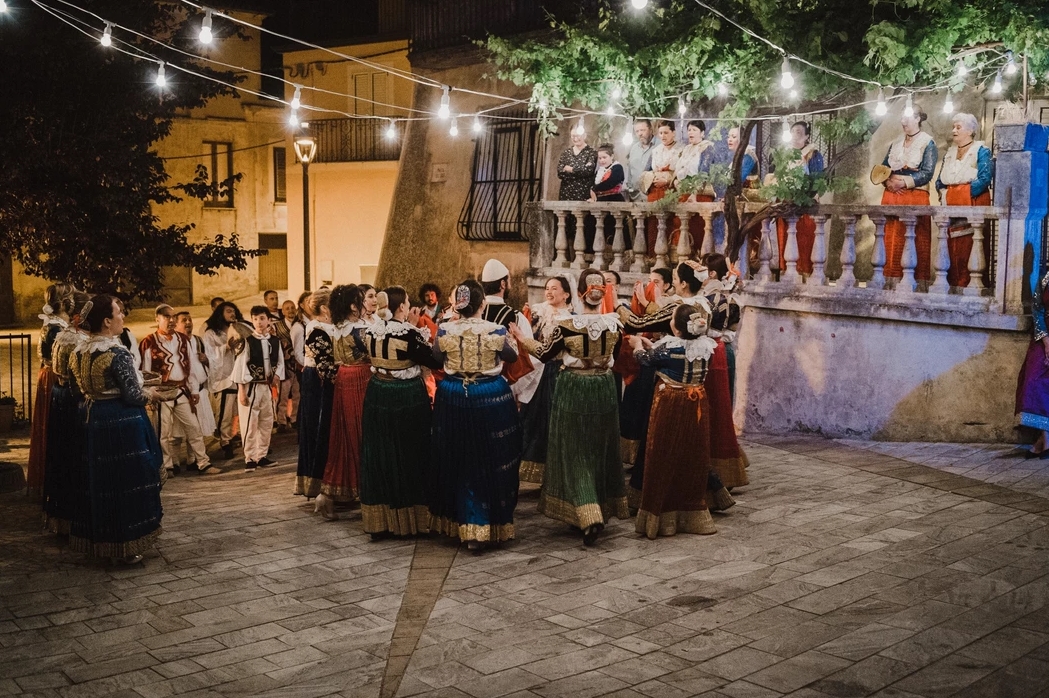 Telegrafi: We have heard that your origin is Calabrian. Can you tell us what is your connection with Albanians?

Francesca Olivieri: My origins are Arbëresh, but an Arbëresh is also a Calabrian person, and an Italian person, off course. My grandmother has often claimed that her village, Santa Caterina Albanese, belongs to a nation that does not exist: the Arbëria. This population is in effect without a nation, but it turns to its own community in difficult times, as it happened at the moment of intervention regarding the refugees from the war in Kosovo, to which they responded with this formula: “We are brothers, our blood has been shed”. The shedding of blood, the double culture, an ethnic belonging rejected or hidden, these are the themes that inspired me to write this piece. I think that being Arbëresh is an opportunity to collect different cultures and create a link between Mediterranean people and Balkan culture. My connection is based on the history of my ancestors, that left their country, and they were scattered in all the south of Italy and then during the time, they were forced to abandon Albania for political reasons. The Balkan culture has always been a source of inspiration for me, so my connection is also made by cinema and Balkan music that I appreciate a lot.

Telegrafi: “Arbëria” is also the first Albanian-language film to be broadcast on Netflix? How happy does this fact make you?

Francesca Olivieri: For me it’s an honor. The Arbëresh are a linguistic minority in Italy. During the years after the war, the process of literacy was a wave that engulfed the entire country. There were many communities that spoke minor languages who were unable to resist the imposition of a common language, so the fact that Netflix gives an opportunity to this minority to speak in a loud voice their language, it’s a relevant event. 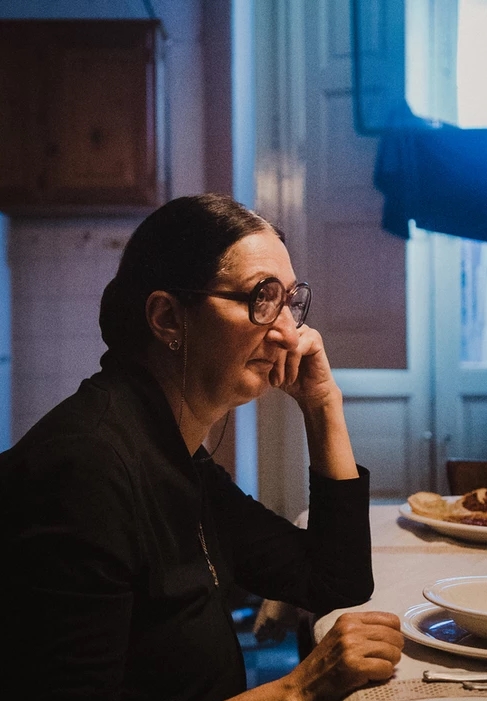 Telegrafi: Have you ever visited Albania and Kosovo? (If so, what impressions you have from visit)

Francesca Olivieri: I’ve been in Albania just once, when the movie was released during the Dea Film Festival, in Tirana. It was exciting for me, also because I was there with Brixhilda Shqalsi, the actress that plays the role for Lucia, and with Anna Stratigò, Aida’s aunt. Brixhilda is born in Tirana so she was nervous of coming back there, after a long time and Anna was excited because she’s a real Arbëresh woman and she felt as at home there. So I was shared between two different emotions and for me being there was a shock, because I thought that it was full of young people and a dynamic place to live. Tirana remembers a north European city like Rotterdam, but at the same time it shows the traces of its past, without any transition in its urban geography, it’s just like that you can discover it’s charm. Sorry, but I’ve never visited Kosovo, but I would like to do it.

Telegrafi: What were the most difficult moments you experienced during the making of this movie?

Francesca Olivieri: There were many difficulties as eve: before (during the preparation) and after (during the post-production). The shooting time is exciting, but there always are unexpected moments, it takes part of the stress of this job. 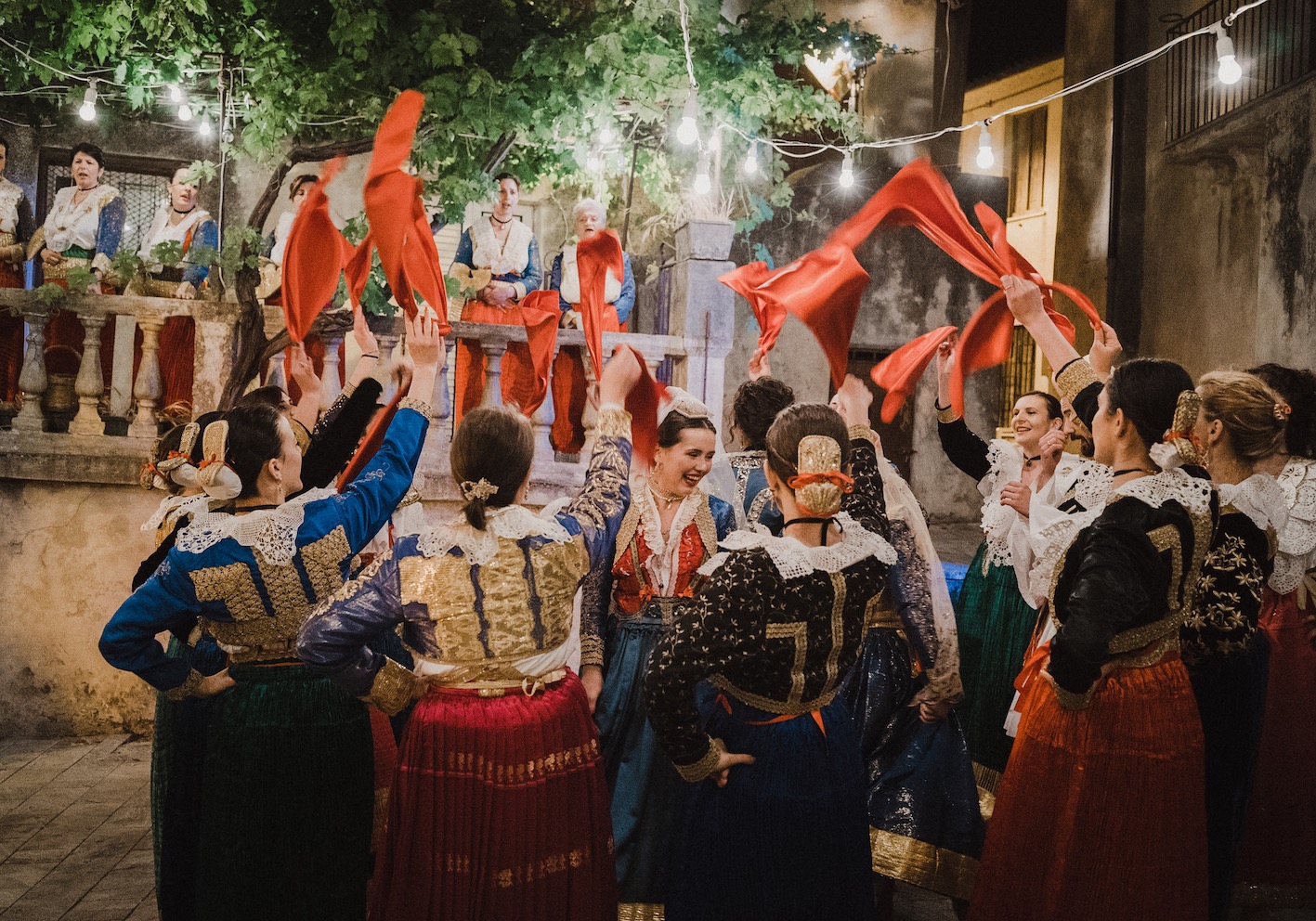 Telegrafi: What about the most pleasant moments on behind the scenes?

Francesca Olivieri: I remember once, when Anna Stratigò said a line that wasn’t on my script, and we all started laughing and then this joke became the catch phrase of all the members of the crew, it was hilarious!

Telegrafi: How do you see the future of the movie “Arberia”? Do you think it will be well received and appreciated by film festivals?

Francesca Olivieri: The movie has been released in 2019, and then showed for the first time in Cosenza for the premiere and it was sold-out: it was a successful evening. Then it was released in many festival in Europe: the first time it was in Tirana at the Dea Festival, and it received the PUBLIC’S JURY AWARD. Then we showed the movie in France, in Wales, in Norway, in Germany for different Italian movie festivals. There always was a large public interested into this story, because many people don’t know about the history of Albania and its ancestors. In Italy during all the shows there was also a pleasant astonishment, because the Italians know the Albanian people and the recent story of this country, but they ignore that their descendants came in Italy during the fifteenth century. 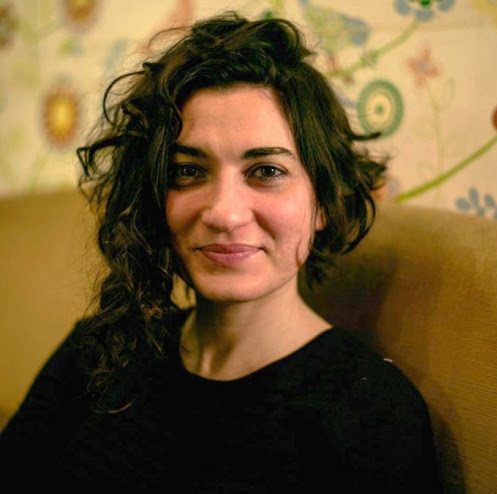 Telegrafi: Have you ever watched an Albanian film, if so which one?

Francesca Olivieri: I was invited with the movie at the Giornate del cinema Albanese, at Casa del Cinema in Roma, in 2019. When I was there I watched a lot of Albanian movies. Then I was invited as member of the jury for the Dea Film Festival, last year. We were distant because of the pandemic situation, we watched many shorts and I remember I was impressed by the students film, they were all interesting for me and it was really difficult to make a choice as member of the jury!

Telegrafi: Francesca, thank you very much for being part of this interview. For the end, what would be your message for our readers?

Francesca Olivieri: My grandmother has often claimed that her village belongs to a nation that does not exist: the Arbëria. This population is in effect without a nation, but it turns to its own community in difficult times, as it happened at the moment of intervention regarding the refugees from the war in Kosovo, to which they responded with this formula: “We are brothers, our blood has been shed”. The shedding of blood, the double culture, an ethnic belonging rejected or hidden, these are the themes that inspired me to write this piece. I hope that the movie will be appreciated, also for this message. /Telegrafi/

The official trailer of “Arbëria” 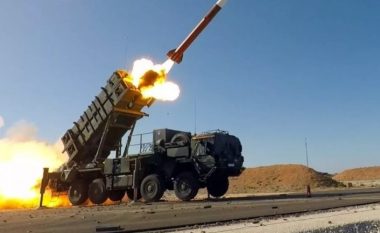 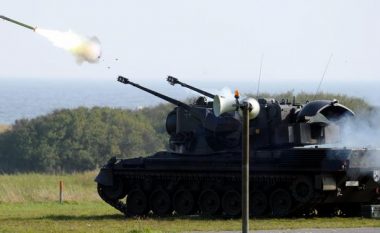 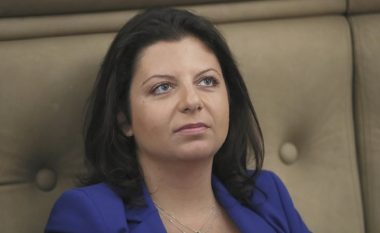 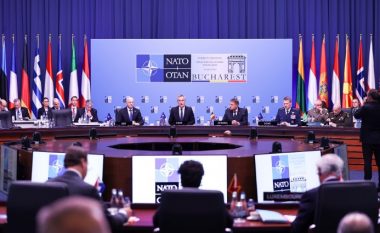 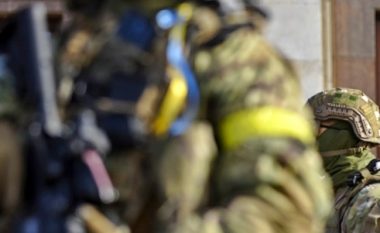 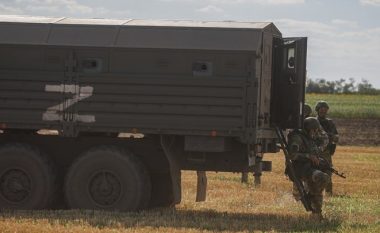 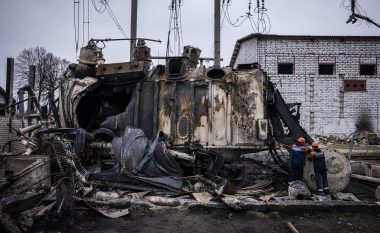 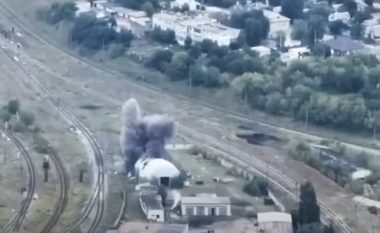 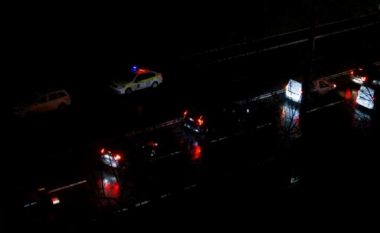